’It’s becoming a must-have’: How an Ottawa coworking hub is riding the work-from-home revolution

Workers everywhere are being liberated from their offices — either by choice or by necessity — and Coworkly’s Maher Arar is helping make that shift possible.

2 days ago By: Kieran Delamont 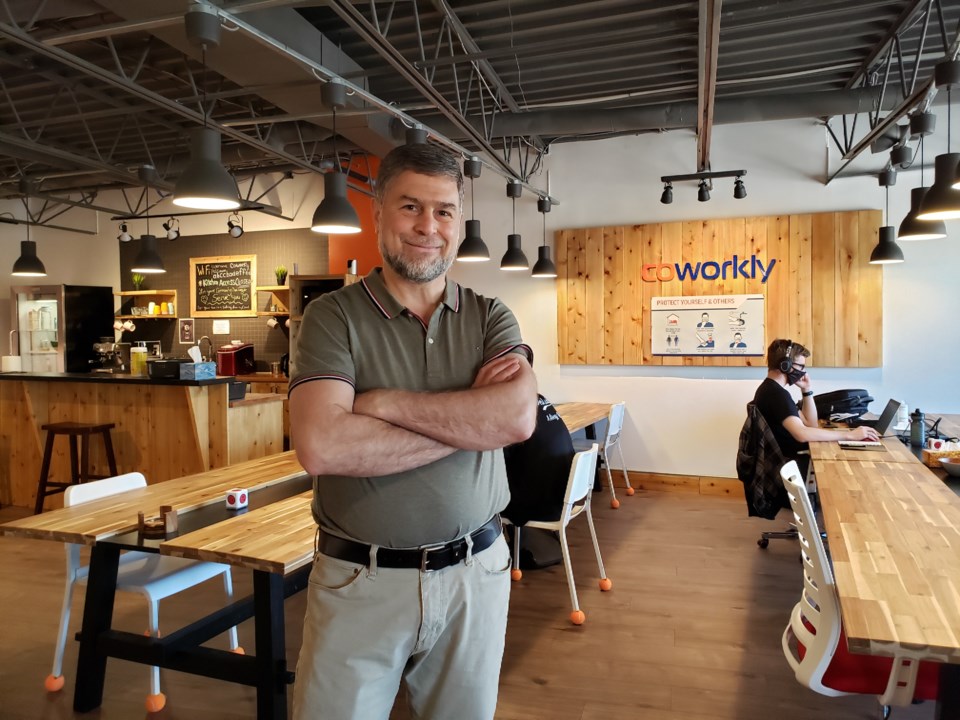 One might assume that Maher Arar, founder of Coworkly, a local business offering coworking spaces with locations in Vanier and Westboro, might be living on cloud nine, as the remote-work revolution seems to be well underway, even if it’s being spurred on by a global pandemic.

As the world slowly re-engages, you might think Arar and Coworkly would be waiting with open arms, ready to sign up members and liberate a generation of workers from drab office blocks and inflexible schedules.

But Arar has a more measured view of where he and Coworkly might sit.

In his telling, the coworking industry isn’t only a beneficiary of the rise of work-from-home, but an antidote to its downsides.

More often than not, it isn’t newly remote workers that gravitate to Coworkly, but those who have already gone remote and want to re-introduce to their workday the sense of structure and community that an office once provided.

Coworkly, founded back in early 2018, was always conceived as something a bit different than the dominant idea of a coworking space. “We don’t do what others are doing just because they are doing it,” Arar says. No ping-pong, no foosball, and no beer on tap. “We’re more a productivity hub than a place to socialize.”

This attitude emerges in interesting ways. Counter to what you might call conventional wisdom, Coworkly doesn’t have much interest in targeting the precarious, urban gig worker (the freelancer writing this article, for example). The future of coworking, Arar says, is suburban.

“Even before COVID, there was a trend where millennials were buying homes outside the city core,” Arar says. “We kind of jumped on this trend and said, ‘Where will Coworkly be in five years?’”

After establishing their first location in Vanier, “we wanted to test that concept,” Arar says, describing their second location in Westboro, which opened in September 2019.

“If we go away from downtown, would they come to us? And they did.”

Arar is saying: If the idea of a coworking hub existing in suburban Barrhaven seems like an awkward transplant, think again.

Arar hopes that they can attract more organizations as clients, in addition to individual members. (In fact, their long-term goal is to have more organizations as clients than individuals.) “Everything is favouring flex spaces,” Arar says. “What you’re going to see, down the road, is micro-HQs” — coworking spaces serving as occasional and periodic home bases, particularly for new companies or those in the tech space.

All of it places Arar and Coworkly at an interesting crossroads.

To be sure, COVID-19 hurt their business, like everyone else; Arar says that they are only now beginning to return to their pre-COVID membership levels. But it is indisputable that the pandemic has opened up new avenues for the coworking industry, and for Coworkly. Arar predicts that by next spring or summer, there will be “huge momentum” shifts towards the coworking space.

A difficult winter without office space might be the best sales pitch Arar could make for a place like Coworkly.

“What’s interesting is the profile of new members is different now,” Arar says. “These people who come to us now, have tasted the bitterness of working from home.” Where they used to have members who treated it like a luxury — a comfortable place they can drop in on now and again — “right now, it’s becoming a must-have.” Now, Arar says, they are signing up members for whom coworking space is perhaps the piece of the puzzle that makes remote work possible in the first place.

Even as the city enters the ‘second wave’ of the COVID-19 pandemic, Arar believes that Coworkly can weather the storm. Their cleaning and distancing practices have generally been well-regarded by members, he says. To him, Coworkly forms a type of community — a shelter in which to weather the storm ahead. So far, that has worked as a strategy, and members have been good about working together to keep things safe.

“We’re not the police, here,” Arar says. “We trust people by default.”